Petroglifos de Toro Muerto (Coordinates: 16°13’20”S 72°30’28”W) is certainly one of the most amazing places I have ever discovered. Founded by the Wari (Huari) culture (500-900 AC) and located in the high Peruvian desert, part of the Colca Valley, Toro Muerto (Eng. Dead Bull) is a collection of ancient petroglyphs scattered over the area of over 5 km2 and consisted of thousands of volcanic boulders from two relatively close volcanoes, the Chachani and Coropuna, with thousands of carvings portraying people, various animals, birds, lizards and mysterious patterns. The site blew my mind to pieces. I found this isolated spot exceptional for at least few reasons.

Firstly – the isolation of the site. I have discovered the site when I was doing some research about pre-Incas cultures and got instantly fascinated by Wari’s mysterious history. To my surprise and great satisfaction the place is not classified as a main touristic attraction and it is not really a popular destination. You can get there with only a few agencies, but the prices are ridiculously expensive, so I decided to get to the place on my own and explore it to my own schedule and liking. The whole expedition from Arequipa took me over 14 hours, with 3 hours dedicated to site exploration, the remaining part is the road. Once the site was reached I was ecstatic to realise I was all alone in the vast desert of Toro Muerto. Literally alone. Not a single soul. No tourists. No tours. No footsteps on the sand. It almost felt like I am the first person to walk on this land and that was the most amazing feeling I have felt in ages.

Secondly – the terrain, sandy and rocky, literally Martian-like desert is not only impressively beautiful but also harsh and extremely challenging. The landscape literally looks like images of Mars sent back to Earth by Curiosity rover! It feels like walking on Mars, though the gravity of Earth still applies and trust me – after a while, you wished you were exposed to that one of Mars. 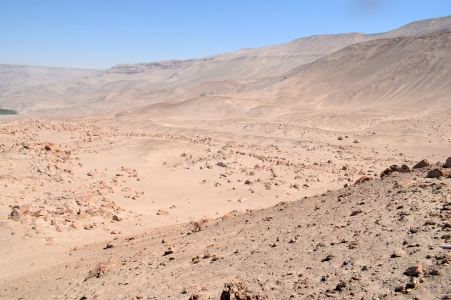 I dropped my jaw many times witnessing the view but also fighting the harsh conditions of the place. The heat in the peak hours was unbearable, after 3 hours of exploration and 3 liters of water consumed I could barely continue. It’s a Desert land with a capital D, located in the high altitude and it lives up to every expectation. There is no shadow at all. There is no vegetation. There are lizards. The place was named for the herds of livestock that commonly died here from dehydration and trust me it’s the most suitable name given.

Thirdly – the Ancient Art of the Wari. The site contains hundreds of thousands of volcanic rocks of various colour – from snowy white to orange and vivid red stones on which the archaeologists have documented more than 5000 (!!!) stones carved with mysterious petroglyphs. It is one of the largest collection of ancient petroglyphs known in the world. The cultural origins of this site remain unknown and the interpretations of the drawings vary widely from symmetrical geometric patterns and objects of unknown meaning to anthropomorphic figures, animals (birds, quadrupeds and reptiles), sunflowers and trees without branches, geometric symbols, zig-zags, squares, diamond shapes and some inscriptions, intaglios, and bizarre writings all over an area, varied from primitive line-based images to highly complex symmetrical patterns and symbols. 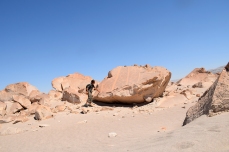 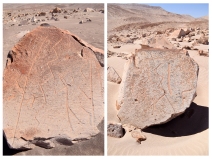 The mystery. Now it’s getting hot! Among all of the above-mentioned depictions, there are some that clearly stand out from the rest. Some petroglyphs portrait animals not to be found in South America’s climate, like Rhinoceros and Hippopotamus.

Also, many human-like figures are wearing strange accessories, like helmets that “emit” or “project” strange patterned waves from their heads. Other beings are carved with a number of very strange characteristics, like antennas on top of their heads. The ones I found really blew my mind away. There is a portrait of a human-like creature with three antennas and a group of others that are wearing square one-eyed helmets producing some sort of waves, often surrounded by animals. One “alien” holds something that looks like a whip or a ray or a lightning in its hand.

Curiously, these enigmatic petroglyphs are according to some, the ultimate evidence of ancient alien visitations in the distant past. Even more fascinating is the fact that some of the petroglyphs of Toro Muerto bear a freakish resemblance to petroglyphs found in other parts of the World, Australia, and Europe in particular, where the ancient man also depicted mysterious beings with ‘halos’ around their heads.

All that only adds to the already boiling hot cauldron of the mystery of the place. To see all petroglyphs in one go is a Sisyphean labor. Once a hill is reached, revealing hundreds of new stones to discover, another one emerges on the horizon. I imagine it can take days or even weeks to explore the site fully. Another unanswered mystery is why the Wari culture decided to use this inaccessible and extremely challenging in terms of the weather location to create their impressive artwork. Who was their audience and what do the images represent remain an enigma.

Ah, if anyone of you needs any info on how to get there and how to get yourself prepared for the harsh terrain just drop me a line or comment down below.

3 thoughts on “The Mystery of Toro Muerto’s Petroglyphs”