This is a gentle reminder for a spectacular astral event to come and a call to connect! Wherever you will be on that glorious night, my dear Earthlings, let’s connect for that event, watch the spectacular dance of the Sun, the Earth and La Luna together and share our experiences after.

A night of magic and wonders ahead, as we gather under a clear sky, away from the cities and artificial lights, wrapped in the veil of the unknown, the sound of nature, soaked in the moonlight and the voice of the sea, surrounded by the spirits, our senses awaken…

We, beautiful souls, gather to witness the astral spectacle above us, the dance between the Earth, the Moon and the Sun and the planetary alignment with Mars slowly approaching its great opposition, we, the tribe, gather to conclude the night with a bouquet of truly meaningful humane connection as we share the space around the fire and sprinkle the air with laughter, joy, dance, healing songs and music.

Sacred Tobacco (bot. Nicotiana Rustica), wild tobacco, known as Mapacho is one of the most important plants in the indigenous shamanistic practices. Shamans from the jungle consider it a Master Plant and the main tool in every shamanistic ritual. Mapacho is seen by them as a friendly spirit, a guide, who can help us navigate in the realm of plant spirits and who can protect us from dark entities and a connector with our dear ones. The art of harvesting wild tobacco is known and practised in the jungle for centuries.

In the Amazon jungle tobacco is used in many forms; smoke, smudge, sniff, powder and even liquid. Unlike popular tobacco sniff, called Rapeé (all Nicotiana Rustica products are legal in Europe, but less popular than “commercial tobacco”), fresh Mapacho leaves contain a lot of natural “organic” energy and are pure, meaning no other plants or additional indigents are used in the process of production. In the native environment, tobacco juice is often used to clean sinuses from infections and tobacco sniff is used to “sharpen senses” before hunters enter the rainforest. I will talk about the practical aspects of those traditions in the circle.

Mars is spectacular this month, approaching the opposition when the Earth overtakes our neighbouring planet in its inside lane around the sun. Mars’s orbit is more elliptical than that of the Earth, meaning that sometimes we pass by closer than other times.

That is the point in Mars’ orbit when it comes closest to Earth. Mars will be at a distance of 35.8 million miles (57.6 million kilometres).
The next time that record will be broken is in 2287.

Thanks to amazing, beautiful friends who organise a periodical fire circles in Rush we will be a part of a whole-night-long gathering. To celebrate this amazing astral event, we will host a beautiful night gathering under a sky, with fire, dance and music jam by talented musicians, singers and sound therapist ( Elemental Sound ), with a selection of ethnic instruments, compatible with this experience. Mapacho circle will be opened to those who are interested, but the fire will be open to all. Trust me – it’s magical. 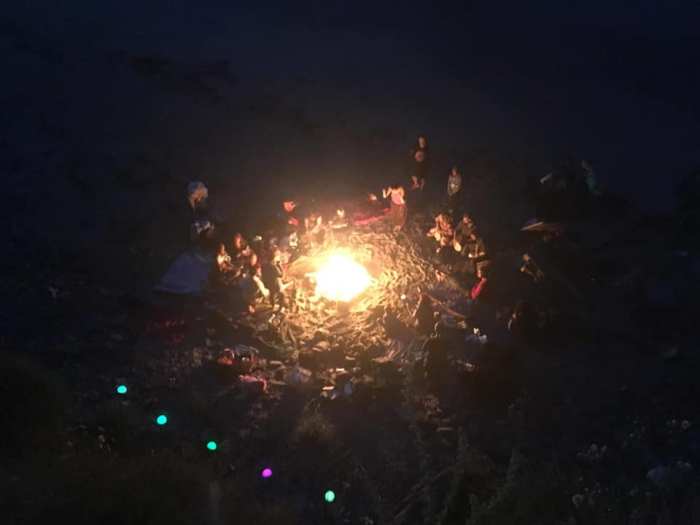