Shipibo designs and art, known as Kené, express an energy matrix woven through all of creation. Inspired by nature and observation of the environment it not only is rooted in the shamanistic visions but, more importantly, in the profound connection with the ecosystem the Shipibo-Conibo tribes are settled in. As such, Kené is not just an art style but it does belong to the ecosystem and is present, in the first place, in plants and animals throughout the Amazon basin.

Kené doesn’t come from people, it was brought to people by nature itself. The general consensus within Shipibo-Conibo tribe is that kené was introduced to them by the ancient Incas, who received it from the observation of the nature and learned from its wisdom.

Our understanding of Shipibo patterns and codes may be still fragmented and requires a deeper understanding of the connection those people achieved and cultivated throughout the generations with mother nature.

Many plants, animals and fish have kené.  Ronin, the sacred Anaconda would be seen as the mother of all the patterned designs. For Shipibo tribe, which has also a profound connection to the river and translates literally to Fish-People, one of the main inspiration for their art and visions come from Ipi fish (bot. Pseudorinelepis Genibarbis), also known as Cara Chama fish, a species of armored catfish native to Brazil and Peru where it is found in the Upper Amazon basin.

Kené is not only seen as art, at least not in the western understanding of art and creativity, but it has a deeper meaning attached, as it is also seen as a universal light matrix, a language of nature that can be translated via art into a physical form and contains a sacred purpose. Kené also is vividly present, literally speaking, in shamanistic visions ignited by ceremonial and medicinal work with plant-based entheogens like Ayahuasca, Noya Rao and Mapacho tobacco. Kené is not only art, it is a representation of organic energy flow and a living form.

There is something magical, pure and compelling about Kené. In a way, Shipibo patterns remind me of hieroglyphs. They are visual and they carry a message. Those who have worked with plant-based medicine will probably find a direct link between nature, art design and vivid shamanistic visions. It almost feels like it’s drawn by the same brush and seems to be some sort of universal, organic, intuitive, elegant, symbolic language. Those geometric patterns hold meaning and any Shipibo tribe member will decode the message hidden in their art with easily. “This is a Seed of Noya Rao, this represents Uni Kaya (spirit of Ayahuasca), Nimea Kaya (spirit of the jungle), this is the underworld guarded by the Ronin (The Sacred Anaconda)”. There are old and wise stories written in Kené.

In the recent generations, Kené has come to a very symbiotic relationship with medicinal plants. Symbols of sacred plants, Ayahuasca, Chakruna, Noya Rao and Mapacho are very common motifs in Shipibo art. An interesting fact is that those motifs, patterns, labirynth-like representations are reported to be seen during Ayahuasca ceremonies not only by people native to those practices but also to foreigners who have never seen or interacted with Shipibo art prior to their Ayahuasca initiation. It is very difficult to tell when exactly this fusion of Shipibo design and Ayahuasca took place, but Shipibo claims that it started in the ancient times via ayahuasca tradition and was only recently reinitiated.

Ronin – The Origin of Kené

A central design symbol for most Shipibo-Conibo designs is the cosmic serpent, the great anaconda, called Ronin. This mythological cosmic creature is considered by the tribe as the source of all of the designs and is said to combine all conceivable patterns in its skin. Some even say Kené should be called Ronin Kené, as this is where it all originates from. 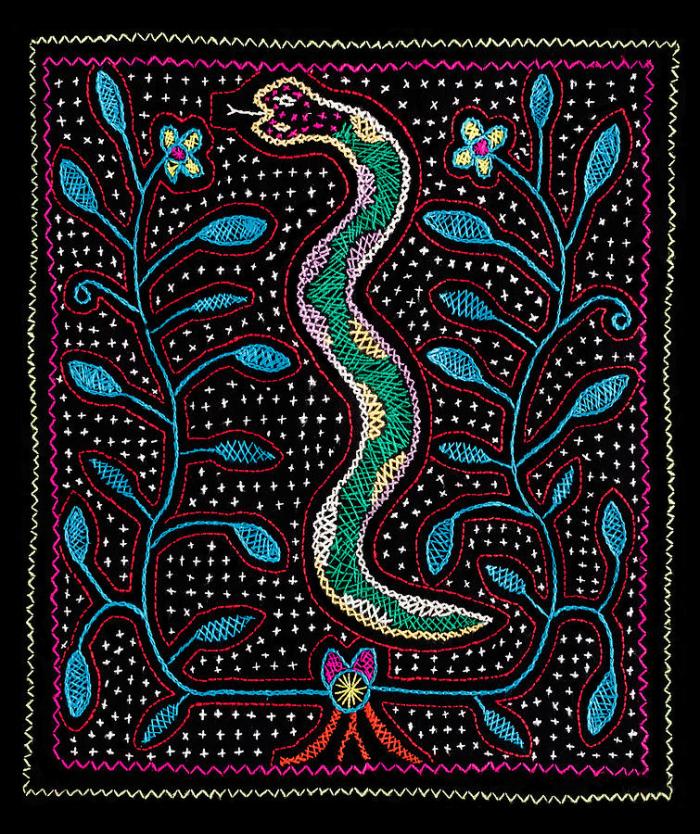 The legend tells that a Cosmic Serpent came to Earth realm from the Underground and showed patterns on its beautiful skin to an ancestral wise woman. She noticed that the most amazing, finest, smallest and most delicate designs were found around the end of the tail (called Shama), where the energy force also culminated. That energy was seen by her as radiating, electric, vibrating power, also as blinding light and almost hypnotic attraction. The woman decided to copy the patterns and use them to enrich her tools and clear the energy of the ceremonial space.

During ayahuasca ceremonies, it’s very common to experience visions of serpents flowing through and around the body. Shipibo people explain that in this way, the serpents clear negative energy and purify one’s state of being.

Stay tuned for more fascinating stories about indigenous traditions and beliefs by subscribing to this blog or visiting Pangean page on FB.